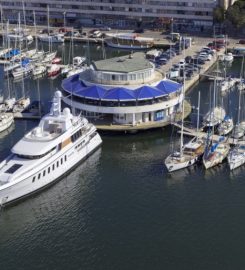 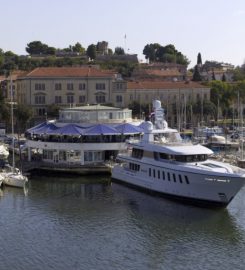 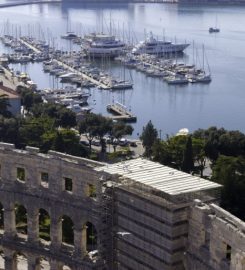 ACI marina Pula lies in the south-eastern part of the city port, in the very heart of Pula. The Marina is open all year round.

The Marina has 192 berths with water and power supply (connections strenght up to 125 A). Marina is equipped to receive up to 40 m long mega-yachts.

Reception desk with an exchange office, newly opened bistro Torta, laundry, nautical equipment shop, charter agency, toilet facilities, parking area and rent-a-car service. The petrol station is located on a small pier near the Marina. All supplies can be easily found in the nearby shops. The Marina also has a WLAN Internet system. The Harbour Master’s office and Customs are in close vicinity.

The port of Pula lies in a natural bay, well-protected by a peninsula and breakwater. The harbor can be safely approached between the breakwater head (an extention of Cape Kumpar) that is marked by a green lighthouse (Fl G 3s 9m 6M) and Cape Proština that is marked by a red lighthouse (Fl R 3s 9m 5M). The lighthouse on Cape Kumpar can be used as a way point (44°53,2’ N 13°47,7’ E). After that one should steer towards the southern cape of Andrija Islet that is marked by a green lighthouse (Fl G 2s 7m 1M). Andrija Islet can be rounded from the both south and north. When approaching the harbor at night, the passage between Andrija Islet and Katarina Island is well marked by two pairs of red and green lighthouses. After that passage on our way to ACI marina Pula there is another lighthouse on Uljanik Island (Fl G 5s 7m 3M), which has to be rounded before the marina comes in sight. Attention should be paid to several large iron buoys, which are randomly anchored along the described course leading to the marina. Maximum speed in the port is 8 knots.

Pula , located on the western shore of Istria near its southern tip, is the largest town in Istria . It is an important industrial, cultural and tourist center. Pula offers many hotels, sports grounds, entertainment programs, recreational facilities, beaches, restaurants, casinos, etc. for tourists. The Croatian Film Festival is held here every July, as is the Pop Music Festival “Arena” and the Istria Regatta. The rock music festival Art & Music Festival is held in August. There is an international airport 6 km from Pula. The Roman Amphitheater (called Arena), from the 1st and 2nd centuries, dominates the harbor area. With a setting capacity of 23,000, it is the sixth largest preserved amphitheater in the world. Other sites include the Triumphal Arch of the Sergi (31BC), the 6th-century mosaics in the collapsed basilica Santa Maria Formosa , the beautiful polyptych in the church of St. Francis and the Temple of Augusts from the 1st century. There is also the Archeological Museum of Istria.